Let’s talk about the most important thing in your life - money.

Woah, hands away from the command+w. Hear me out. I know, I know. “Money can’t buy happiness”. Money can’t give you true love, or more years on your life, or make your kid not grow up to be Jeffrey Dahmer, or let you teleport.

Actually wait. Yes, it can.

Listen, money can buy you a United States presidency. It can buy you time, health, therapy, education, and coaching. It can buy you freedom, medical operations, sins, even human lives. Money is the power to live your life how you want until you die.

Money is a unit of value that society uses to measure how good your life will be. And you live in society.

Now you’re saying: Fine, asshole. Money is the most important thing. How do I get some?

I wanted to be an entertainment broadcaster when I was growing up. I thought it was fun. I’ve got this nasally voice that makes my delivery interesting and comical. Plus I’ve got an ugly face which was perfect for audio. Bah dum tiss.

So I dove into the world of broadcasting in my first year of college, found my way into an internship at the top radio station where I was living at the time, and landed a spot on the morning show as the funny kid who read news headlines. Thousands of people heard my voice every day.

There I was. I had made it. The intern. It would be only a matter of time before they offered a permanent position on the show, and I would transmutate into a future Conan O’Brien. I was feeling pretty good, so I asked,

His usual impenetrable charm deflated ever so slightly.

“About 40k a year,” he said, and smiled again, the fake kind of smile where the teeth glistens in the light but the eyes are the sad eyes of a million sorrowful, regretful tears.

I changed my major the next day to computer science.

Fast forward 15 years, I own a voice company that millions of people use and I get to work with world-famous voice actors. I still think it’s fun. That DJ I spoke to all those years ago can’t afford his mortgage.

Make decisions that will give you more choices, not fewer. Computer science brought me money. Money brought me the freedom to make my own voice company, plus a whole lot more....

Because I chose money from an early age, it gave me the ability to discover things I never knew I never knew - like travel. Show me a person who wasn’t significantly impacted by traveling the world and I will suck your dick off in front of a live audience. The world is mind-blowing. Because of travel, I found Japan, which I have come to love as a culture and a society, and it feels like Japan is the home that I never quite felt while living in the US and in Europe. If I had chosen my voice acting first, I may have satisfied an immediate desire, but at the detriment of my future self.

You read that right, Convict. Even if you’re a convicted felon, you can migrate to Europe, or Asia, or anywhere. Just throw money at it.

When you’re young, you have the energy required to break through in your career to establish yourself. Unless at 18 you know you want to be a starving violinist for 50 years, choose the career that will make you money first. Money is the gateway to other careers. Be a doctor for 15 years at $300k a year, THEN you can be a helicopter pilot, then a nature photographer, then a craft beer brewer, or whatever you want to be.

I’m not implying that everything should be in pursuit of money. Someone had to labor over the lo-fi youtube playlist that lets you chill. Someone had to paint the mural that catches your eye. You might listen to a concerto that makes you just melt into the emotional couch of deep feels. Someone had to write that music.

Someone had to, not me. I wrote the software that allows people to buy tickets to their concert, instead. It made me a fair bit of money. Now I can write a novel or discover Japan, and I can do it without financial burdens to lower my standard of living or deal with deadlines that may risk the quality of my work. Art is a joy, and I encourage everyone to pursue it after they gain financial independence.

Ikigai is the cross section of

If you find this cross section, you will be happy. You will find your reason for being....

...are you done laughing yet? Okay, me too. Ikigai is a solid concept, but it’s not realistic. Finding that cross section would take a long-ass time. Try doing the ‘what you can be paid for’ section first, and the rest will take care of itself. 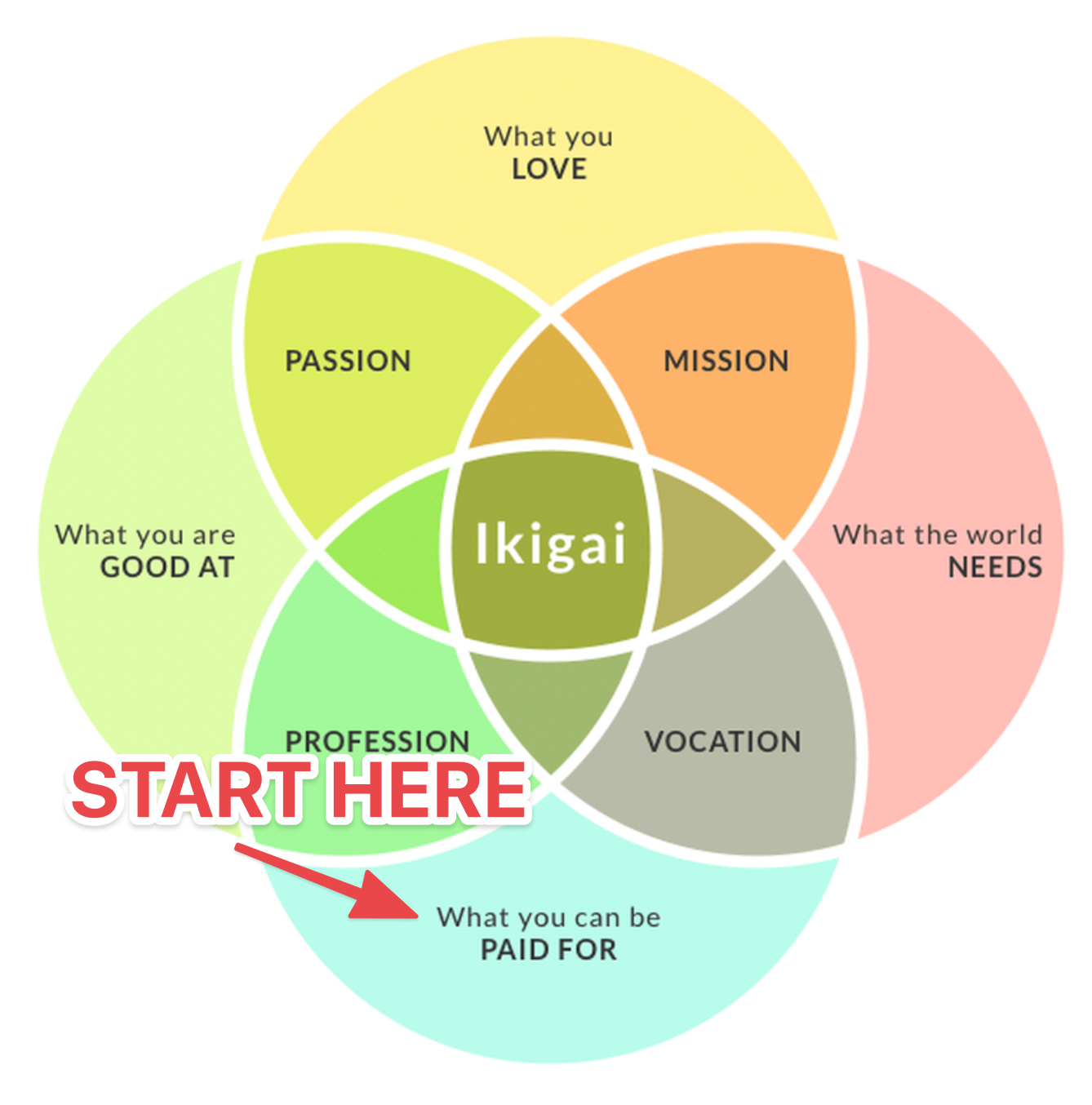